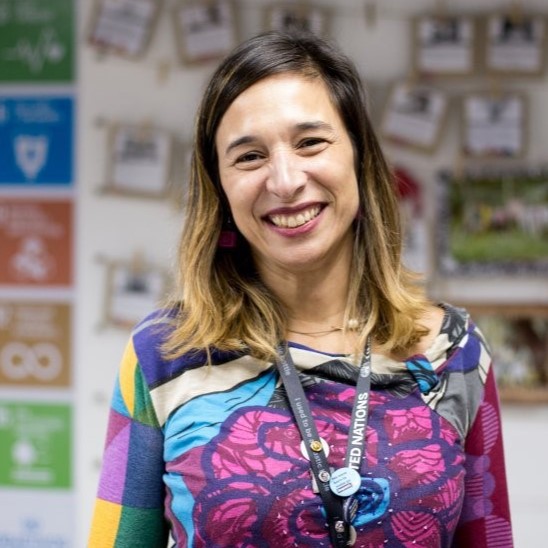 Social Entrepreneur of the Year 2010 in Venezuela, Coach & Mentor

Claudia is a social entrepreneur passionate about making a difference in the world. She has been Co-founder and President of Impact Hub Caracas C.A. since Nov 2017 and Co-founder and
Director of Hub Caracas A.C. since Oct 2013; member of the Board of the Global Impact Hub
Association 2015 – 2018, of the Membership Committee since Aug 2018; Global Partnerships
Lead July 2018 – Jan 2019, as well as made part of the Global Strategy Team in 2015 and 2017.

She has been a coach in the formation of new Impact Hubs, especially in Africa and Latin
America and a consultant for numerous corporate clients promoting innovation and
intrapreneurship. She is passionate not only mentoring entrepreneurs but also supporting teams
within companies and corporations to co-create solutions and solve their challenges by promoting
an entrepreneurial approach, using Design Thinking, innovation tools and creative leadership.

She also has more than 14 years of experience in the financial sector in Latin America (Citi NY, Citi Venezuela, Banesco), of which the last 8 she was dedicated to microfinance in Venezuela cofounding Banesco Community Banking (Banca Comunitaria). In total she has more than 28 years of experience developing social innovation programs and initiatives within the public, private and
third sector (NGOs) in favoring low-income families and the less fortunate segments of our
society. Her work has taken her to 53 countries around the world and she has been recognized
with several national and international awards.

She was awarded “Social Entrepreneur of the Year 2010” in Venezuela by Schwab Foundation of the World Economic Forum and Fundación Venezuela Sin Límites, as well as “Outstanding Social
Entrepreneur in Venezuela” in 2011 by Schwab Foundation for Social Entrepreneurship and the
World Economic Forum; “Responsible Leader” of the BMW Foundation since 2011; Venezuela
Ambassador of Women Entrepreneurship Day Organization (WEDO) since 2017; Venezuela
Regional Ambassador of TechnovationGirls since 2017; Local Leader MujeresB in Venezuela
2020; The Global Good Fund Fellowship Program Finalist 2016; International Visitor Leadership
Program (IVLP) “Changemakers II: the Impact of Social Entrepreneurs in the US” as Venezuela’s
representative, Department of State – US Embassy Venezuela 2016; Top 50 Most Influential
Leaders from IESA alumni, Oct 2015; 15 Role-Model Women, El Nacional, Todo en Domingo
Magazine, Oct 2014; she was named among the Top 100 most Successful Managers in
Venezuela by Gerente Magazine in 2012 and 2008, as well as Mención Honorífica “Mujer
Analítica” Honorary Mention 2012, by Mujer Analítica, Nov 2012; Technovation Regional
Ambassador in Venezuela since 2017; USA President’s Volunteer Service Award, Bronze (> 100
hrs of annual volunteer work) New York 2006 and Civil Defense Medal in 2nd Class, Defensa Civil
Gobernación Distrito Federal 1996, among other awards.

She holds a Systems Engineer degree from Universidad Metropolitana, a MBA from Loyola
University Chicago, a Master of Finance from IESA and postgraduate studies on Creative
Leadership at THNK School of Creative Leadership, Amsterdam. She has completed executive
courses in Microfinance, Social Entrepreneurship and Corporate Social Responsibility at Harvard
Business School, Harvard Kennedy School, INCAE and INSEAD Business School. Claudia also
loves to play tennis, cooking, art, painting, traveling, singing and music.
If you ask her what is the impact that she would like to create in the world, she will answer without
hesitation: to defeat poverty!