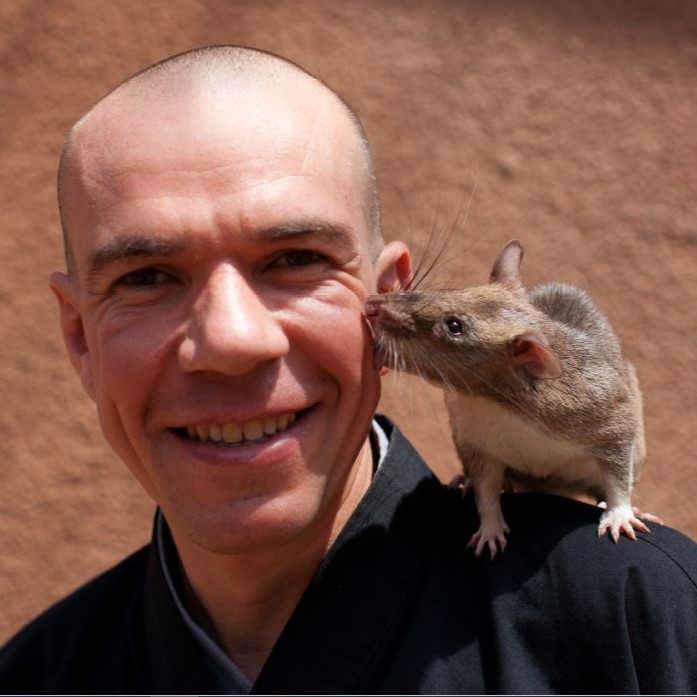 Bart Weetjens’ organization APOPO is training HeroRATs to save human lives by detecting landmines and Tuberculosis (TB). APOPO tackles difficult, expensive and dangerous humanitarian detection challenges with a low-tech, locally sourced and sustainable technology based on the keen sense of smell of trained giant African pouched rats. These so-called HeroRATs empower BoP populations in Sub-Sahara Africa and South-East Asia, providing them with a local and appropriate technology that makes them less dependent on expensive imported equipment and expertise.

APOPO is a Belgian NGO with headquarters in Tanzania, where research and development, animal breeding and training, and staff development occurs. APOPO has operational mine action projects in Mozambique, in Thailand at the Cambodian border, and is starting in Angola. So far, over 2.6 million square meters of land have been reopened and returned to the communities. In the process, thousands of landmines, unexploded ordinance, light arms and ammunition have been cleared and dismantled. The landmine detection technology is accredited by International Mine Action Standards (IMAS) and has been endorsed by 11 African countries. APOPO’s Tuberculosis detection program is in its operational research phase in Dar Es Salaam, Tanzania. So far, over 86.000 patients’ samples have been submitted to a second line screen by HeroRATs identifying more than 2,200 TB patients who were initially missed in the clinics, preventing at least 22,000 TB transmissions to healthy people. APOPO works with renowned international partner institutions and passed the €3 Million budget cap this year.

While APOPO’s mine action approach is rolled out through integrated mine clearance operations in various countries, they are also providing detection services to partnering mine action NGO’s. For the TB application, public health establishments remain reluctant to endorse diagnostic rats, despite the excellent results. APOPO’s headquarters in Tanzania are evolving into a Centre-of-Excellence to support research and development, training, implementation and dissemination of the technology in various applications. In the short term APOPO still has insufficient operational projects to be self-sustainable, but through various capacity building, business development and marketing strategies, they are developing a strategy to become more self-reliant. Their long term plan is to set up a hybrid structure and engage in profitable detection applications that can help fund and expand the purely humanitarian work. By increasing the reach of APOPO’s activities, Bart is creating locally-driven technological solutions to some of the world’s most pressing challenges.